Share a memory
Obituary & Services
Condolences & Photos
Read more about the life story of Marilyn and share your memory.

Visitation will be from 10:30 a.m. until the service time of 12:00 p.m. Saturday, December 3, 2022, at Our Savior’s Lutheran Church, rural Calamus. Interment will follow in the church cemetery.

Marilyn was born November 2, 1932, in Fulton Township, Illinois. She was raised in the area and attended public schools there until she graduated from Sterling High School in 1950. After high school she attended Jane Lamb School of Nursing in Clinton, Iowa, where she obtained her nursing diploma in 1953. On November 5, 1954, she married Edward Malmanger, who farmed in the Grand Mound area. They were longtime residents of the community. In addition to being a wife, mother, grandmother and great-grandmother, Marilyn also worked at DeWitt Community, Jane Lamb, and Mercy Hospitals. She was a surgical recovery nurse for over 35 years and provided critical care to postoperative patients. She retired from her nursing career in 1995.

In retirement, Marilyn loved spending time with her family and friends. She enjoyed traveling and exploring the world around her. She spent many hours researching and documenting family history to better define her family tree by tracing her lineage. She also enjoyed creating unique picture albums for the purpose of providing encouragement and cheer to family, friends and others. She loved people and always demonstrated unselfish concern for the welfare of others. Marilyn was a past President of a local Beta Sigma Phi Sorority, where she was a member for 0ver 50 years. She was also "Queen" and the founding member of the DeWitt Chapter of the Red Hat Society.

Marilyn lived an ordinary life with grace. She will be remembered for her baking and humor, her character as a Christian, her devotion as a homemaker, her generosity as a citizen, her influence as a person, and for her excellence as a woman.

She was preceded in death by her husband, Edward; sons, Edward Jr.; Steven; both parents, three brothers and two sisters.
Memorials on behalf of Marilyn can be directed to Genesis Hospice, 2546 Tech Drive, Bettendorf, IA 52722 or Family Choice.

Arrangements are in the care of Schultz Funeral Home, Grand Mound. Condolences may be expressed at www.schultzfuneralhomes.com 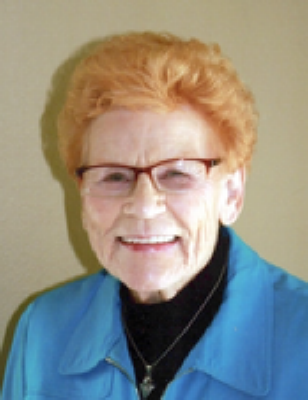